Milestones in the long struggle for American freedom

President Abraham Lincoln issued the Emancipation Proclamation on January 1, 1863, as the nation approached the third year of the Civil War. Lincoln's proclamation, which declared "that all persons held as slaves" within the rebellious states "are, and henceforward shall be free,” was “a fit and necessary war measure for suppressing rebellion.” The Proclamation also declared the acceptance of Black men into military service. By the war’s end, almost 200,000 Black soldiers and sailors had fought for the Union and freedom. 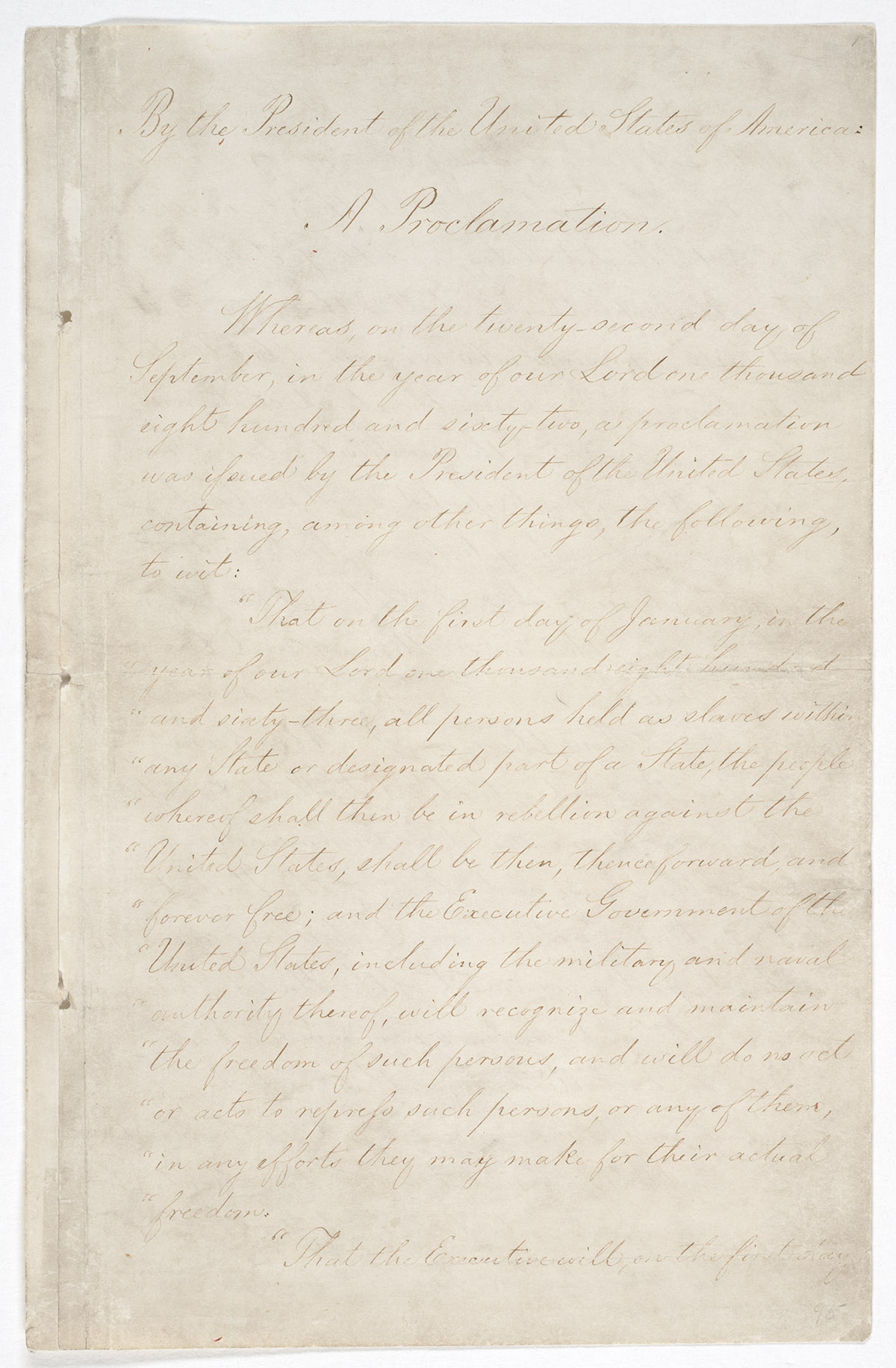 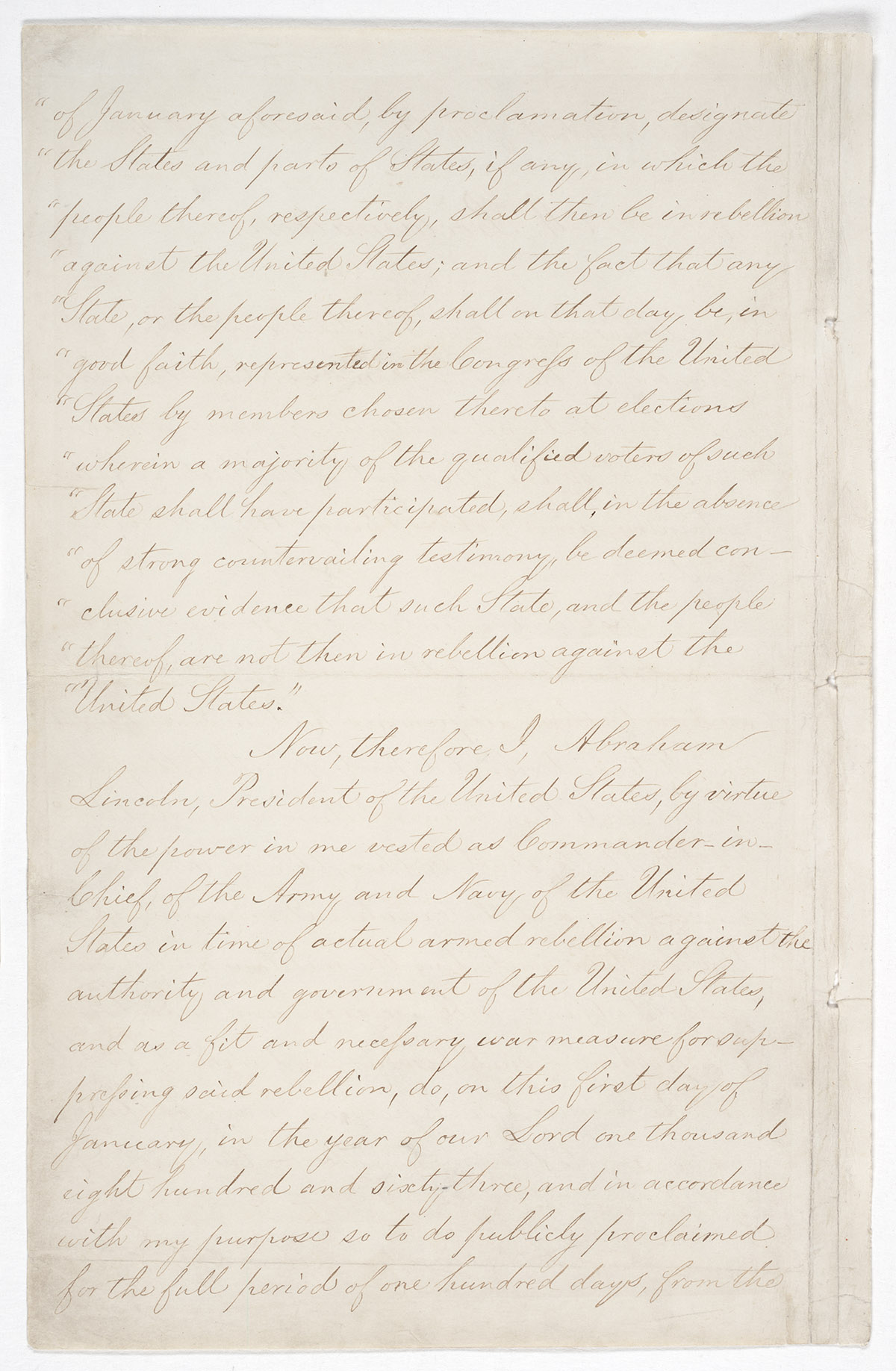 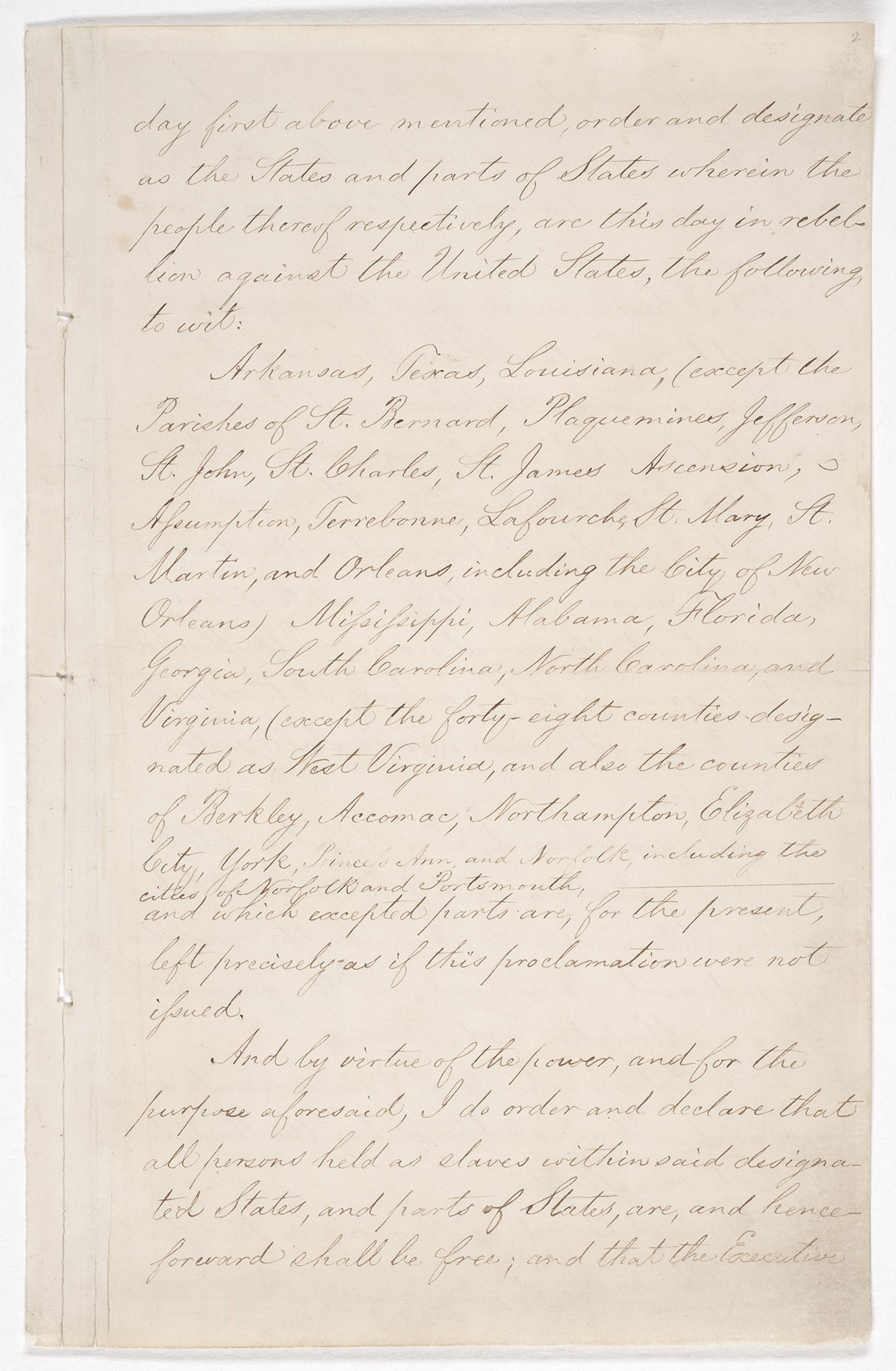 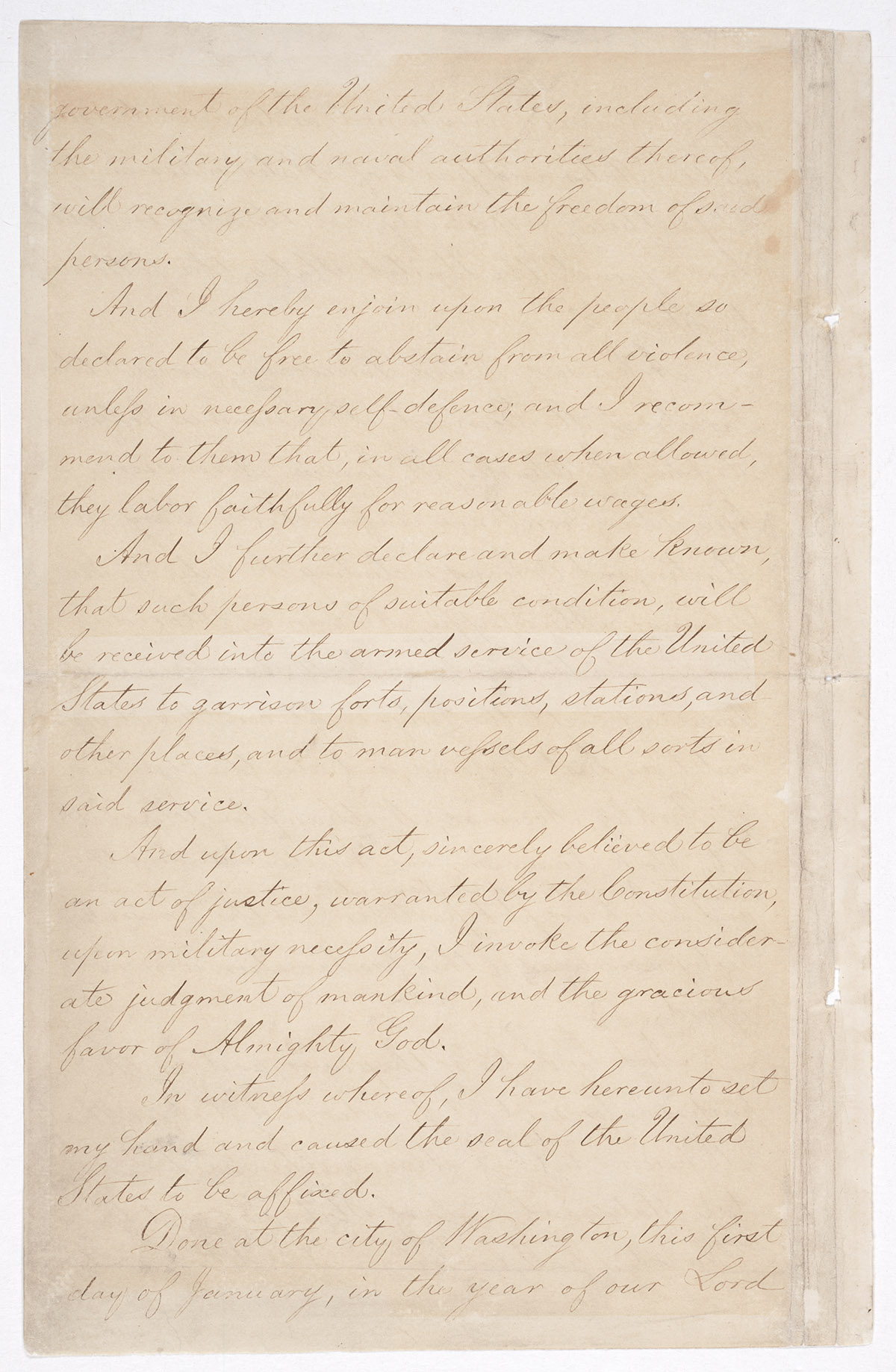 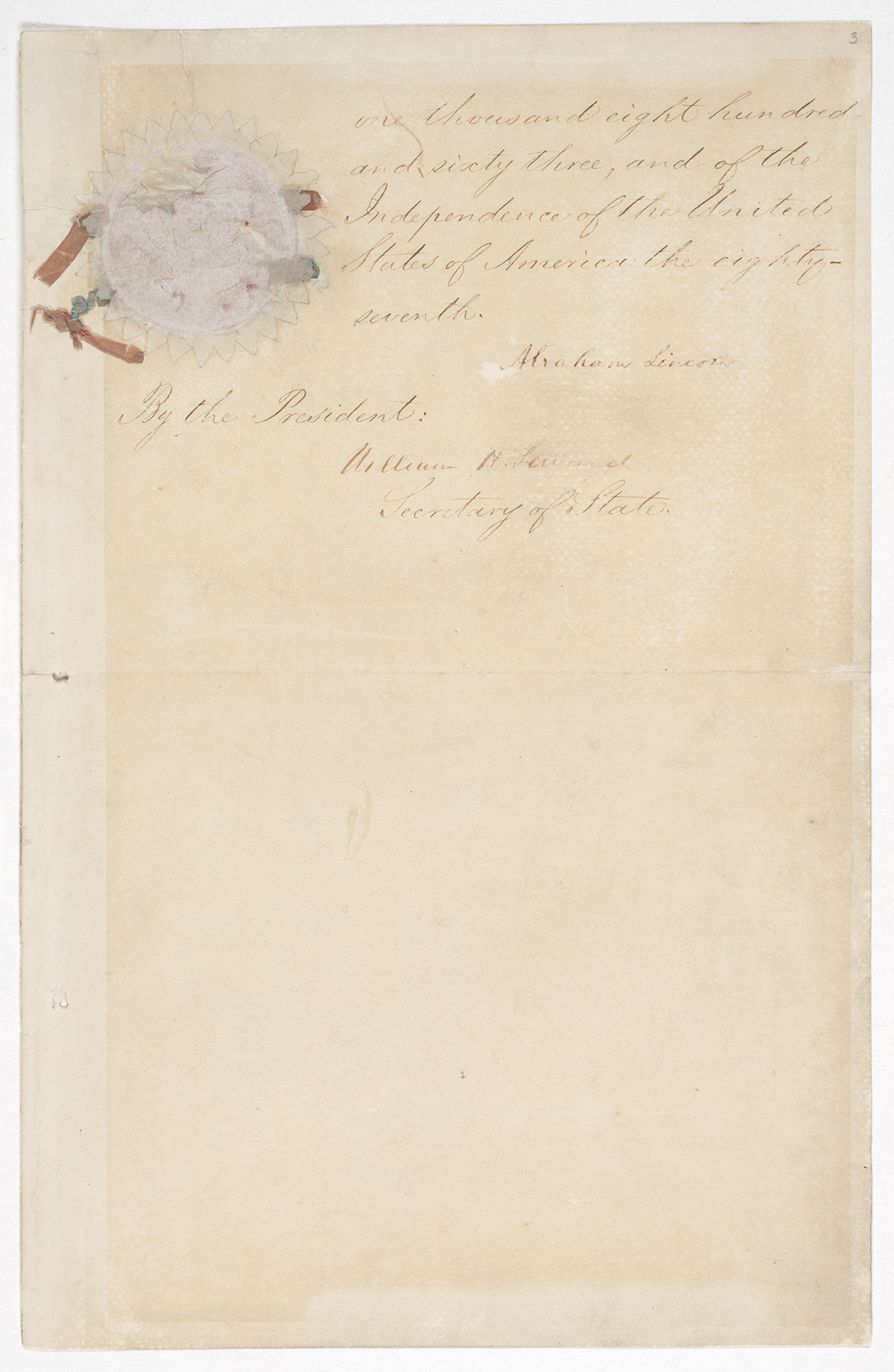 Despite its expansive wording, the Emancipation Proclamation was limited. The freedom it promised was dependent upon a Union victory in the war. It also only applied in 10 Confederate states, leaving more than half a million men, women, and children in bondage in parts of the Confederacy already under Northern control and in the loyal border states.

Nevertheless, the Emancipation Proclamation promised freedom and a new beginning for several million Americans and fundamentally transformed the character of the war. It recognized the moral force behind the Union cause and strengthened the Union both militarily and politically. As a milestone along the road to chattel slavery's final destruction, the Emancipation Proclamation has assumed a place among the great documents of the nation.

The freedom promised in the Emancipation Proclamation was finally delivered to 250,000 people who remained enslaved in Texas two and a half years after President Lincoln’s historic proclamation and two months after Union victory in the Civil War. On June 19, 1865, U.S. Maj. Gen. Gordon Granger issued General Order 3, which informed the people of Texas that all enslaved persons in the state were now free. This day has come to be known as Juneteenth, a combination of June and 19th. It is also called Freedom Day or Emancipation Day, and it is the oldest known celebration commemorating the end of slavery in the United States.

Emancipation, however, was not a singular event in United States history. There were many emancipation days as enslaved people obtained their freedom in the decades spanning American independence through the Civil War. They were an important element of the abolition movement, which fought to end chattel slavery and liberate the millions held in bondage across the country. That goal was not fully realized until December 6, 1865, when the requisite number of states ratified the 13th Amendment to the Constitution, legally ending slavery in the United States.

While Juneteenth has been formally celebrated primarily by people in African American communities in Texas, nearly all states and the District of Columbia recognize Juneteenth as an official state holiday or observance. On June 17, 2021, President Joe Biden signed a bill into law establishing Juneteenth as a federal holiday.

The Emancipation Proclamation and General Order No. 3 Featured Document Presentation is made possible in part by the National Archives Foundation through the generous support of The Boeing Company.